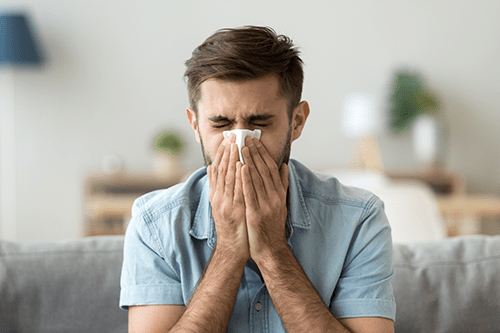 Why Do We Suffer from Nasal and Sinus Discomfort?

WHAT YOU NEED TO KNOW

The body’s nasal and sinus membranes have similar responses to viruses, allergic insults, and common bacterial
infections. Membranes become swollen and congested. This congestion causes pain and pressure; mucus production increases during inflammation, resulting in a drippy, runny nose. These secretions may thicken over time, may slow in their drainage, and may predispose to future bacterial infection of the sinuses.

Congestion of the nasal membranes may even block the eustachian tube leading to the ear, resulting in a feeling of blockage in the ear or fluid behind the eardrum. Additionally, nasal airway congestion causes the individual to breathe through the mouth.

Each year, more than 37 million Americans suffer from sinusitis, which typically includes nasal congestion, thick yellow-green nasal discharge, facial pain, and pressure. Many do not understand the nature of their illness or what produces their symptoms. Consequently, before visiting a physician, they seek relief for their nasal and sinus discomfort by taking non-prescription or over-the-counter (OTC) medications.

WHAT IS THE ROLE OF OTC MEDICATION FOR SINUS PAIN?

There are many different OTC medications available to relieve the common complaints of sinus pain and pressure, allergy problems, and nasal congestion. Most of these medications are combination products that associate either a pain reliever such as acetaminophen with a decongestant or an antihistamine. Knowledge of these products and of the probable cause of symptoms will help the consumer to decide which product is best suited to relieve the common symptoms associated with nasal or sinus inflammation.

OTC nasal medications are designed to reduce symptoms produced by the inflammation of nasal membranes and sinuses. The goals of OTC medications are to: (1) reopen to nasal passages; (2) reduce nasal congestion; (3) relieve pain and pressure symptoms; and (4) reduce potential for complications. The medications come in several forms.

Nasal Saline Sprays: Non-Medicated Nasal Sprays
Nasal saline is an invaluable addition to the list of over-the-counter medications. It is ideal for all types of nasal problems. The added moisture produced by the saline reduces thick secretions and assists in the removal of infectious agents. There is no risk of becoming “addicted” to nasal saline. It should be applied as a mist to the nose up to six times per day. Nasal saline can also be made at home: contact your otolaryngologist for details.

Nasal Decongestant Sprays: Medicated Nasal Sprays
Afrin nasal spray, Neo-Synephrine, Otrivin, Dristan nasal spray, and other brands decongest the swollen nasal membranes. They clear nasal passages almost immediately and are useful in treating the initial stages of a common cold or viral infection. Nasal decongestant sprays are safe to use, especially appropriate for preventing eustachian tube problems when flying, and to halt progression of sinus infections following colds. However, they should only be utilized for 3-5 days because prolonged use leads to rebound congestion or “getting hooked on nasal sprays.” The patient with nasal swelling caused by seasonal allergy problems should use a cromolyn sodium nasal spray. The spray must be used frequently (four times a day) during allergy season to prevent the release of histamine from the tissues, which starts the allergic reaction. It works best before symptoms become established by stabilizing the nasal membranes and has few side effects.

Decongestant Medications
Pressure and congestion are common symptoms of nasal passage swelling. Decongestant medications are OTC products that relieve nasal swelling, pressure, and congestion but do not treat the cause of the inflammation. They reduce blood flow to the nasal membranes leading to improved airflow, less breathing through the mouth, decreased pressure in the sinuses and head, and subsequently less discomfort. Decongestants do not relieve drippy noses. Their side effects may include light headedness or giddiness and increased blood pressure and heart rate. (Patients with high blood pressure or heart problems should consult a physician before use.) In addition, other medications may interact with oral decongestants causing side effects. Both of these are available as single products or in combination with a pain reliever or an antihistamine. They are labeled as “non-drowsy” due to a side effect of stimulation of the nervous system.

Decongestant-Combination Products
Some medications are combined to reduce the number of pills. TylenolSinus or Advil Cold and Sinus exemplify products that join a pain reliever (acetaminophen or ibuprophen) with a decongestant (pseudoephedrine). These products relieve both sinus and cold/flu symptoms yet retain all the attributes of the individual drug including side effects.